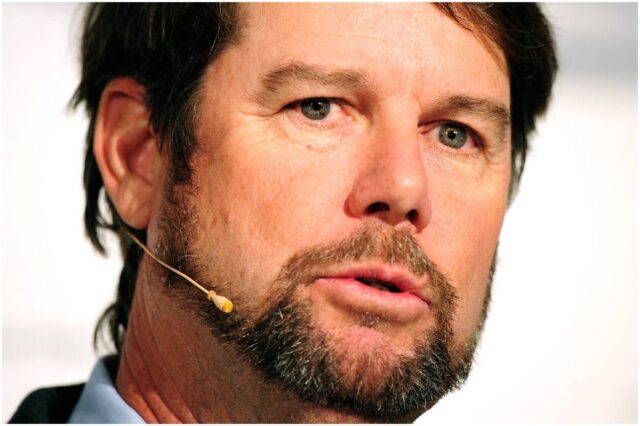 Paul Azinger is an American TV golf analyst and a former professional golfer who won 12 PGA Tours and the 1993 PGA Championship. Azinger transitioned into broadcasting, covering the games for ESPN and currently for NBC.

Paul started playing golf when he was 5. He played as an amateur until graduating from college. His mother Jean (1929–2016) was an accomplished golfer.

During his childhood, he moved to Sarasota, Florida, where he attended and graduated from Sarasota High School. In the late 1970s, Paul attended Brevard Community College.

In 1987, after making bogey at both the 71st and 72nd holes, he finished one shot behind Nick Faldo at the Open Championship.

In the same year, he earned PGA Tour Player of the Year honors.

In 1993, Paul won his only major at the PGA Championship with 4 birdies over the last 7 holes for a 30 on the back nine.

In 2008, he was the U.S. Ryder Cup captain at Valhalla Golf Club in Louisville, Kentucky.

Note – the Ryder Cup is a biennial men’s golf competition between teams from the United States and Europe. Ryder Cup is contested every 2 years with the venue alternating between courses in Europe and US.

Paul led the American team to its first victory over the European squad since 1999.

He refused an invitation to the White House for winning the Ryder Cup team.

In 2018, he joined NBC Sports’ lead golf analyst to replace Johnny Miller, an American former professional golfer who was inducted into the World Golf Hall of Fame in 1998.

During an interview, Paul declared:

“Everyone says I’ve got big shoes to fill. I’m not trying to fill anybody’s shoes.”

Azinger went on to say:

”The challenge is to be yourself. The action is the action. I don’t mind being blunt. It doesn’t have to be derogatory.”

In a different interview, Azinger said:

“The reality is I’m not going to fill Johnny Miller’s shoes.”

”I’m just going to be myself. Johnny just said tell it like it is. Those shoes are not to be filled. That’s not my goal.”

”I’m currently the lead analyst of the USGA championships for Fox Sports, and I’m pretty busy.”

In December 1993, he was diagnosed with non-Hodgkin lymphoma in his right shoulder. The treatment included 5 weeks of radiation and 6 months of chemotherapy.

Just before the diagnosis with non-Hodgkin lymphoma, Paul defeated Greg Norman on the 2nd hole of a sudden-death playoff after the 2 finished regulation at 12-under 272 in the 1993 PGA Championship at Inverness.

“You don’t ever try to imagine what would have happened without getting sick. As you get older, you start to think more about it.”

”I was a pretty confident player. I might not have been No. 1, but in my brain I was. I had a ridiculous run.”

In a different interview, Paul declared:

“My doctors are very optimistic that they have caught this early enough so that a full and complete recovery is expected.”

”I plan to be hitting golf balls again in about six to seven months, and I am looking forward to defending my PGA Championship.”

“My wife always said I was good at two things — playing golf and flapping your gums.”

On May 1, 1995, Paul wrote his first book – ”Zinger,” that chronicled his battle with non-Hodgkin lymphoma.

On May 1, 2010, he published another book, titled – ”Cracking the Code: The Winning Ryder Cup Strategy: Make It Work for You.”

In this book, management consultant Ron Braund and Paul share the team-building philosophy which helped win the Ryder Cup.

“I’ve had an exciting life.”

“Staying in the present is the key to any golfer’s game.”

”I’d spent summers scraping and painting boats. I knew I didn’t want to do that the rest of my life.”

One of Paul’s hobbies is poker, and Azinger played in the World Series of Poker in 2006 and 2008.

He said about Tiger Woods:

“It’s impossible to be the next Tiger. There is never going to be anything like that.”

”What impressed me the most about Matt Wolff is the uniqueness of his swing.”

In 1999, he started to use a belly putter (a specific type of putter which the golfer “anchored” the end of the shaft against his or her belly). Azinger is frequently credited with popularizing the putter on tour.

Azinger earned most of his wealth from being a professional golfer. Between 1988 and 1994, Paul spent almost 300 weeks in the top 10 of the World Rankings.

He had 12 wins on the PGA Tour, including the 1993 PGA Championship which he won in a playoff over Norman.

After his retirement, he worked as a golf analyst for ESPN and NBC. His salary as a golf analyst was not revealed to the public, but in the US, a sports TV analyst has an average annual salary of about $400,000. Therefore, Paul Azinger has an estimated net worth of $13 million.

READ THIS NEXT: Cliff Dixon Bio