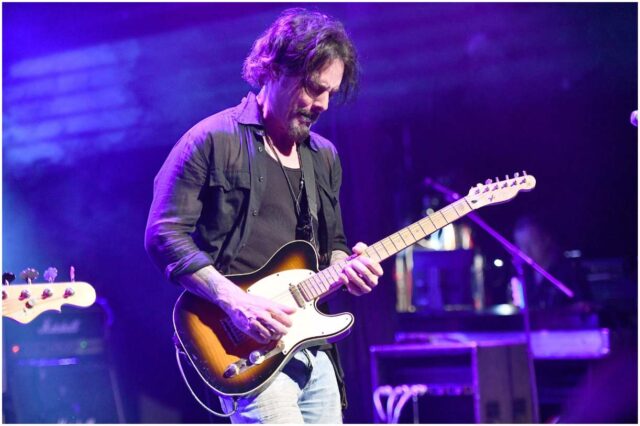 Richie Kotzen is an American guitarist, songwriter, and singer who has a unique style that he has described as a mix of jazz fusion, rock, and soul music.

He has released acclaimed solo work and worked with Poison and The Winery Dogs.

“I grew up listening to Philadelphia radio. The first concert I remember was in Valley Forge (Pennsylvania), seeing Stevie Wonder and shortly after that I saw George Benson.”

“I know why I hear music the way I hear music… You’re influenced by your surroundings, but in the end you end up creating your own kind of thing.”

Richie started playing music when he was 5 years old. At age 7, Kotzen was inspired by New York City band KISS to learn the electric guitar.

When he turned 18, Richie headed west to San Francisco. There, he recorded his first album (Richie named his first album by his own name – Richie Kotzen) for Shrapnel Records, a guitar-oriented record label that was started in 1980 by record producer Mike Varney.

The Shrapnel Records also helped launch the careers of numerous other adept guitarists, like:

In 1991, at the age of 21, after recording 3 albums for Shrapnel Records, Richie moved to LA. There, Kotzen joined Poison, an American rock band.

Poison’s breakthrough debut album, titled – ”Look What the Cat Dragged In,” was released in 1986.

The band hit their peak with their 2nd album, entitled – ”Open Up and Say… Ahh!,” which is certified 5x platinum in the United States.

Moreover, Poison has charted 10 singles to the Top 40 of the Billboard Hot 100, including the Hot 100 number-one, “Every Rose Has Its Thorn,” and 6 Top 10 singles. The band has sold more than 15 million records in the US and about 45 million worldwide.

Richie was fired from Poison when it was discovered he was in a romantic relationship with his band-mate Rikki Rockett’s fiancée.

In 1989, Kotzen created the video Rock Chops for REH video, highlighting several of his formative techniques, including using fluid sweeping and wide intervals.

In 1999, he replaced Paul Gilbert as a guitarist in the mainstream rock band Mr. Big.

In 2006, Kotzen was the opening act in Japan for The Rolling Stones. In the same year, he released the Ai Senshi album, a collection of theme music from the Japanese Anime series Gundam, sung entirely in English.

In the summer of 2006, he released his first compilation, named – ”Instrumental Collection: The Shrapnel Years.”

In 2008, he released his first official live album, titled – “Live In São Paulo,” which featured Dan Potruch on drums and Johnny Griparic on bass.

In 2013, he joined hard rock supergroup the Winery Dogs alongside Billy Sheehan and Mike Portnoy. In the same year, he appeared on the band’s debut and 2015 follow-up, ”Hot Streak.”

In 2017, Richie released an album – ”Salting Earth.” During an interview, he stated:

“The most recent album is Salting Earth, and it’s been out for a year. We did a lot of touring on the record, we went on a big circle around the globe. I went to places like Australia, Singapore, and India for the very first time. We went to North America, South America, and had shows in Europe, Korea, and Japan.”

”I took some time off, and we’re now doing a second run in North America. We’re going to do a couple of shows in Canada, and I’ve never done solo shows there before, so that’ll be fun.”

On January 25, 2018, he released a video for his single ”The Damned” via YouTube. The single was filmed by director Vicente Cordero at Paramount Ranch in Agoura, California.

The couple ended their relationship and divorced in 1998. They dated for 1 year before getting married.

Kotzen has a daughter named August.

In 2002, he bought a commercial building in LA and established a recording Studio/Production company. Kotzen has since been producing solo albums with various figures in jazz, rock, and fusion.

In 2014, he was asked about this commercial building. Kotzen replied:

”That was a few years back. I did do that, but I sold the building in 2005 to Travis Barker and Mark Hoppus from Blink-182. I haven’t been back there since.”

”I know somebody told me that they changed a lot of the decor. When I bought the building, my father and I went in and rehabbed it and converted into a studio. We both like old, Gothic architecture, so we decorated it like that.”

When asked about how would a young guitarist get his break in the present day, Richie said:

”I guess they go on The X Factor. It depends on what you want to do. I guess if you want to be a teen pop star, there’s a path to that and it is those reality shows.”

”You get famous in so many different ways now. Before, you got famous because you sang great or had a great song. Now a lot of people are getting famous just because, and “What can we do with this person?”

Kotzen earned most of his wealth by playing in several bands (like – Poison or The Winery Dogs.) as well as playing solo.

Some of his albums include – 50 for 50, Go Faster/Return Of The Mother Head’s Family Reunion, Bi-Polar Blues, and The Inner Galactic Fusion Experience.

Therefore, American guitarist Richie Kotzen has an estimated net worth of $2 million.

READ THIS NEXT: Who is Kirstin Maldonado?