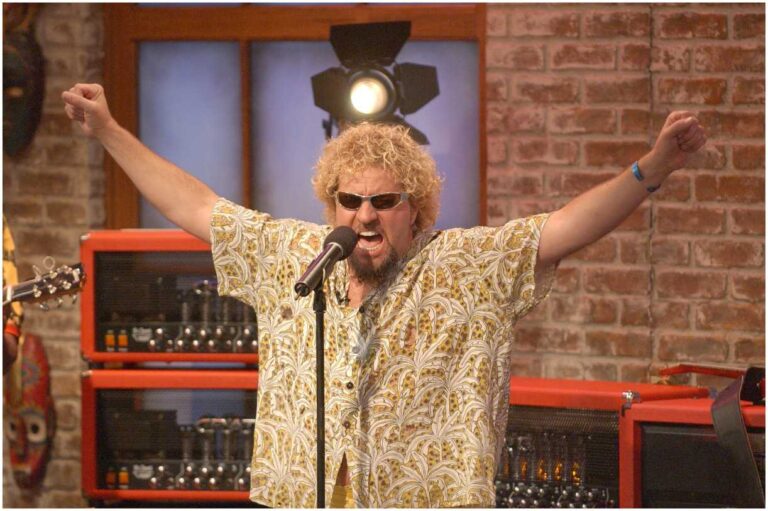 He is of Italian and Irish descent.

His father was a boxer but also worked in a steel mill.

Sammy spent most of his childhood in Fontana, California.

Hagar fronted his first band, the Fabulous Castilles, at the age of 14.

He graduated from Fontana High School.

In the 1970s, Sammy first came to prominence with the hard rock band ”Montrose.” The group disbanded in early 1977.

At about the same time, Sammy began a solo touring and recording career.

From 1983 to 1984, he was part of a band, named HSAS (Hagar Schon Aaronson Shrieve). Other members of the band are drummer Michael Shrieve, bassist Kenny Aaronson, and lead guitarist Neal Schon. During the time they were active, HSAS released a semi-live album, called – ”Through the Fire.”

In 1987, his single “Give to Live” from I Never Said Goodbye reached #1 hit on the Billboard Album Rock Tracks.

In 2003, Sammy reunited with Van Halen for a worldwide tour. In 2004, Van Halen released its second greatest hits collection, entitled – ”The Best of Both Worlds.” In the following year, Sammy again left the band.

In 2007, Hagar was elected into the Rock and Roll Hall of Fame.

In 2011, Hagar released his autobiography, titled – ”Red: My Uncensored Life in Rock.”

In 2014, he formed The Circle, with drummer Jason Bonham, Waboritas guitarist Vic Johnson, and Michael Anthony.

Sammy released the cookbook ”Are We Having Any Fun Yet? – The Cooking & Partying Handbook” in September 2015.

The two divorced in 1994. When asked if he thinks the marriage was a failure, he responded:

Sammy went on to say:

Sammy has two children with Betsy (Andrew and Aaron).

In addition, Hagar has two more children with his second wife, named Samantha and Kama.

”All these big corporate guys that are billionaires to begin with, ripping off their employees.”

READ MORE: Who is IceJJFish’s girlfriend?

”It’s hard at my age for as long as I have been doing this to go out and just do a show.”

When asked by Rolling Stone about the best and worst parts of success, Hagar replied:

”The best part is that you get to live your dream.”

”The only downside – maybe – is that someday you’re not as relevant as you were.”

He donated $100,000 for the UCSF Benioff Children’s Hospital in San Francisco.

Hagar earned most of his wealth from being the lead singer of two rock bands – Van Halen and Montrose.

In addition, he has his own TV show on AXS TV ”Rock & Roll Road Trip with Sammy Hagar.”

Sammy is also a partner or owner of eight restaurants.

In 1996, Hagar founded the Cabo Wabo Tequila brand after he partnered with the Rivera family, a small Mexican Tequila maker who has been in operation since 1937.

”When I created Cabo Wabo, I never dreamed that it would be received so well by my fans and people who really love good tequila.”

In 2007, Hagar sold 80% from the Cabo Wabo tequila brand for $80million to Gruppo Campari.

“Cabo Wabo is a strategic acquisition for Gruppo Campari as it significantly contributes to build our diverse portfolio of ultra premium brands in the United States.”

In 2009, Sammy bought his Lake Arrowhead estate property roughly for $2.3 million. The house features a living room anchored by a limestone fireplace, a family room, a formal dining room, a two-island kitchen, and beamed ceilings.

In March 2018, he sold his home in Maui’s Haiku area for $3.1 million. Therefore, Sammy Hagar has an estimated net worth of $125 million.

READ THIS NEXT: Who is Cari Fletcher’s girlfriend?