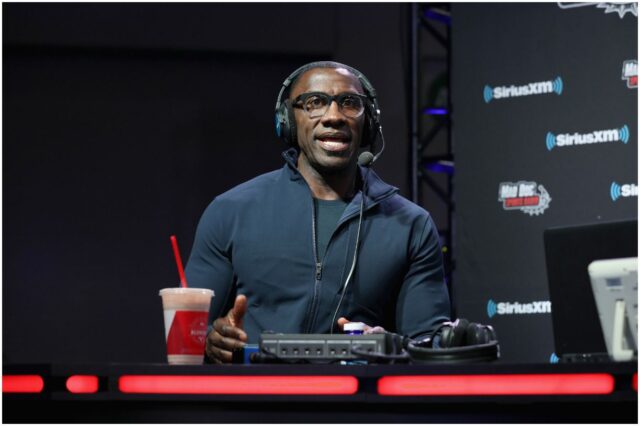 He’s a Savannah State alum, a three-time Super Bowl champion, and an inductee of the Pro Football Hall of Fame.

He’s been a part of the starting line-up for the Denver Broncos and the Baltimore Ravens, and is the three-year co-host of a major FS1 hit sports show.

Is there anything we don’t know about the charismatic Georgia sportsman?

He and his brother, NFL wide receiver Sterling Sharpe, grew up in a poor household in Glennville, Georgia.

The NFL superstar once joked that the Sharpe family were so poor, when a robber broke into their house, he and his sibling robbed the guy.

Shannon graduated high school and went on to Savannah State, where he played football and basketball, and competed in long jump, triple jump, and discus.

The all-round sportsman was part of the All-Southern Intercollegiate Athletic Conference, being selected for three consecutive years. He was voted the organization’s Player of the Year in 1987.

Life as an NFL Great

In the 1990 NFL Draft, Sharpe was drafted 192nd overall to the Denver Broncos.

During this time he also secured a major endorsement contract with General Mills–the cereal industry giant.

Sharpe transferred to the Baltimore Ravens for two years—winning another championship ring in the process—before returning to the Broncos to finish out his career.

In 2003, Shannon retired from the NFL and joined CBS as an NFL analyst. He had played twelve seasons in total for the Denver Broncos, and two seasons with the Ravens—winning three Super Bowl championship rings and bowing out as the NFL’s all-time leader in receptions, receiving yards, and receiving touchdowns by a tight end.

These records would eventually be broken by Tony Gonzalez and Jason Witten. Despite that, Shannon was named to the NFL’s All-Decade Team for the 1990s.

In 2011, Shannon Sharpe was inducted into the Pro Football Hall of Fame.

Long-time football fans might think of one particularly memorable display by the former Bronco.

The pretend phone-call to then president Bill Clinton didn’t help the beleaguered Patriots team. They lost 34-8, finally getting some points on the board in the second half of the game.

Since retiring from the game that set him up for life, Shannon Sharpe hasn’t given up the grind.

The current host of FS1’s Undisputed, Sharpe also acted as commentator for CBS Sports’ The NFL Today show. Sharpe has received criticism from some because of his poor grammar and delivery—both flaws that haven’t held the retired footballer back so far. Quite the opposite, many fans are drawn to his media presence since he seems to embrace his own faults and doesn’t conform to the status quo.

In 2013, Shannon officially accepted a role as spokesperson—and column writer—for FitnessRX For Men magazine. He also featured on the September 2013 cover.

He co-hosts Opening Drive with Bob Papa on Sirius NFL Radio, and even starred in an American Dad! episode as—you guessed it—himself.

Shannon Sharpe is currently not married.

In 2013, Shannon Sharpe met fitness instructor Katy Kellner at the gym where she worked.

Over the next few years of their relationship, fitness would be a major part of their time together.

They scheduled time together for workouts, Flywheel spin classes, and weight training.

These interests didn’t keep them together long-term.

The pair got engaged in 2016, and split sometime later—with Kellner getting pregnant by her co-worker in 2018.

Shannon never publicly addressed the breakup, but clearly wasn’t too devastated by the relationship’s breakdown.

He has proudly aired photos of himself and the glamorous Nicole Murphy on live television.

Despite fans pleading for her to give the 6’4 ex-footballer a chance, people will have to wait and see how the not-quite-romance plays out.

What is the net worth of Shannon Sharpe?

Shannon Sharpe has an estimated net worth of $15 million.

Sharpe has received a new deal in 2019, however, Sharpe’s salary at Fox Sports 1 Undisputed is currently unknown. His partner on Undisputed — Skip Bayless — earns $5.5 million per year.

Looking for some entertainment? Check out Shannon Sharpe shooting his shot with Nicole Murphy—and restore your faith in tenacity. You can also check out his Twitter account.

READ THIS NEXT: Who is John Rocker?