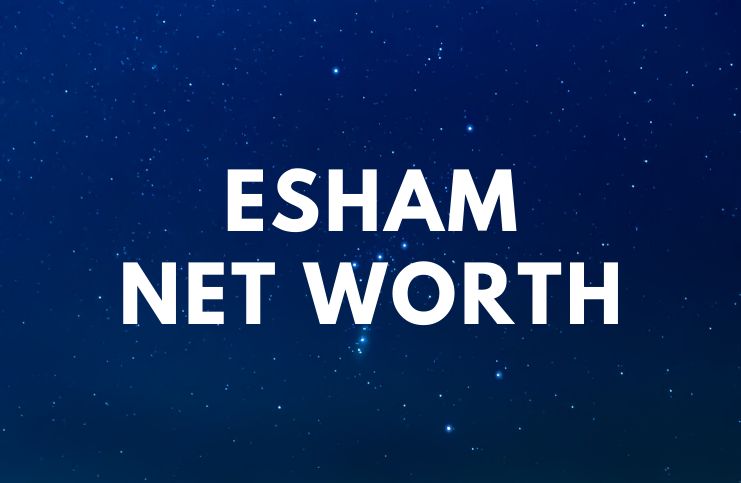 Esham (Born Raasham Attica Smith) is an American rapper from Detroit, Michigan. He is considered to be a pioneer of the hip-hop subgenre horrorcore as well as the Detroit hip hop.

Emerging as one of the first-ever hip-hop artists from Detroit, Raasham released his debut studio album, ”Boomin’ Words from Hell” at age 16 in 1989.

“I had a dope flow, and he thought I could bring something new to the game, just coming from the city of Detroit.”

”Back then, it wasn’t really a [rap] music scene in Detroit. Everybody was just imitating what everybody else was doing.”

He refers to his style of music as “acid rap.” Raasham Attica Smith’s style has also been described as horrorcore hip hop. He said:

”People were literally scared of my records. There have been so many rumors about me and my records. People got the first album, and they would just make up stories.”

They’d get into an accident and be like, ‘I got into an accident because I was playing that tape.’ It wasn’t like we helped ourselves when we described what was in people’s heads. It wasn’t to shock people, though, but to get people involved in what we were doing.”

Smith grew up splitting time between the Seven Mile neighborhood on the East side of Detroit, where he lived with his mother. In addition, he spent the summers with his grandmother in the hip-hop mecca participating in that culture’s mid- to late-’80s boom.

Raasham attended Osborn High School. During high school, he studied guitar, piano, and trombone as well as listened to artists such as Run-DMC, Ozzy Osbourne, Sugar Hill Gang, and Kiss.

In 1989, at the age of 16, he released his debut album, Boomin’ Words from Hell. Raasham said about the album:

“It was the crack era, […] and that’s where all that really came from. It was all an expression about Young Boys Incorporated, Mayor Coleman Young, the city we lived in and just the turmoil that our city was going through at the time.”

”We referred to the streets of Detroit as ‘Hell’ on that record. So that’s where my ideas came from.”

According to Jason Birchmeier:

“Most fans taking a chronological approach to his catalog should be fairly numb to Esham’s exploitative shock attempts.”

”Yet if this is one of your first experiences with Esham the Unholy, this album should pack a punch with its dark nature.”

In May 1996, Smith released his 5th studio album, entitled ”Dead Flowerz.” The album peaked at number 38 on the Billboard Top R&B/Hip-Hop Albums chart.

In 2002, he signed to Psychopathic Records, releasing the compilation ”Acid Rain.”

On November 18, 2003, he released his 9th studio album, entitled ”Repentance.” The album peaked at #10 on the Top Independent Albums chart, #9 on the Top Heatseekers chart, and #71 on the Top R&B/Hip-Hop Albums chart.

In 2009, Nastas released the mixtape “The Vatican.”

In June 2010, he recorded “Walk Toward The Light,” a collaboration with One Man Kru, an international pro-wrestling superstar & global underground artist.

“I am tired of Eminem. I just want him to keep it real…quit being a b***h. He f**kin’ sold a lotta people out in the city, man. He needs to stop disrespecting the city and making people hate Detroit even more.”

”That’s what that was about….don’t even say shit about Detroit.”

Interestingly, Eminem has listed Smith as an influence, as he mentions on his debut album, ”The Slim Shady LP.”

In December of 2012, Smith released Venus Flytrap, a 32-track album continuing the drug theme of his previous album.

In 2015, Insane Clown Posse and Smith reconciled their differences and Raasham performed at the 2016 Juggalo Day “Ringmaster” Show.

Following the release of his 2008 album “Sacrificial Lambz,” he petitioned to run for mayor of Detroit, however, Esham was unable to raise enough signatures.

He is known for incorporating elements of rock music in his beats, and his lyrics cover a number of subjects, including:

His influence eventually fueled the careers of other Detroit hip hop artists, like:

Other famous rappers and musicians are – Metro Boomin, Filthy Frank, and TM88.

Smith earned most of his wealth by selling his albums, advertisements on his YouTube channel, sponsors, selling tickets to his concerts as well as managing Reel Life Productions. Therefore, Esham has an estimated net worth of $6.3 million.

READ THIS NEXT: Who is Margo Rey?