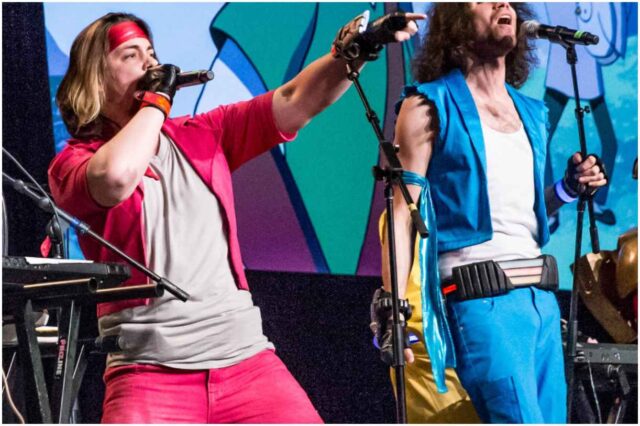 Arin Hanson is an American YouTuber, voice actor, cartoonist, gamer, and comedian who is mostly known as the founder and co-star of the YouTube Let’s Play web series called ‘Game Grumps.’

In order to pursue voice acting, he dropped out during his junior year of high school.

In 2001, he began his work as an Internet content creator.

On this channel, he has created numerous animated web series, including The Awesome Series, in which he parodies different video game franchises, including Metal Gear, Pokémon, Sequelitis, and Ninja Gaiden.

READ MORE: Who is Shroud?

His first animated series, “Metal Gear Awesome” was very popular on YouTube. At some point, Hansom was approached by MTV to produce animated shorts for MTV’s online video gaming show, called The G-Hole. But, MTV restricted him from submitting these movies anywhere but The G-Hole.

In 2012, he teamed up with Jon Jafari, a famous YouTuber. Together, the duo hosted a video game based on the web series ‘Game Grumps.’ With Jafari as ‘Not-So-Grump’ and Arin as ‘Grump,’ the two would debate, banter, and philosophize through video games.

In June 2013, Jafari decided to leave ‘Game Grumps,’ and Hanson chose Danny to be his new partner.

As ‘Game Grumps’ popularity grew, Arin produced a new show under the ‘Game Grumps’ titled ‘Steam Train,’ which is hosted by Ross O’Donovan and Dan Avidan.

He published his first novel ”Ghost Hunters Adventure Club and the Secret of the Grande Chateau” in March 2020.

In 2006, he provided the voice of Bruce Banner in the video game ”Marvel: Ultimate Alliance” as part of a competition held by ”Activision.”

In 2009, Arin provided the voice for the character John Gore in the video game ”Minigore.”

In 2012, he provided his voice for the game ”Detective Grimoire,” a Kickstarter project that was successfully funded on August 3, 2012.

His father, Llyod Hanson, is a musician who plays accordion, guitar, and keyboard. Also, his father is the creator of the site called Old Farts With Guitars.

Suzanne Berhow is a regular on ”Game Grumps” spin-offs such as Steam Train, Grumpcade, Table Flip, and Hunting Monsters.

Hanson lives with his wife at his home in Glendale California.

READ MORE: Who is Ben Brode?

His signature includes a drawing of Snake from Metal Gear Awesome.

The internet sensation performed as a storyboard artist on the webcomic show – ”Axe Cop.”

Hanson made 2 flash films as gifts for his dad on his birthday titled “Its Dads Birthday Again” and “Happy Birthday Dad.”

He appeared as a contestant in the 3rd season of the dance competition web series ”Dance Showdown,” alongside Maxine Hupy.

Hanson regards Mega Man X to be his favorite game.

His favorite movie is Cat Goes to the Vet.

Hanson has said that he is diagnosed with regular ADD, attention deficit disorder.

”Hey kids, you might be familiar with our editor, Kevin. But did you know, that he’s, too handsome? Think about it.”

“You gotta make a statement, You’ve got to look inside yourself and say ‘what am I willing to put up with today?'”

“Listen to your elders or whatever.”

“With cartoons, there really wasn’t a way to communicate with fans in a direct way, I was just making comedy content.”

“First of all, you’re dumb, and second of all, third of all.”

“It’s so easy to make a Halloween costume, all you gotta do is ruin some sheets.”

“If space is nothingness then how do we compare speeds other than to comparing planets by how speed they fast each other?”

“I am grateful that people feel empowered to speak up about things that hurt them.”

“My dad told me that I would be accepted as I am, a true man, but little did he know that wouldn’t be the case.”

”Please don’t let beards go out of style I can’t go back.”

“You can’t open up the story of my life and just go to page 738 and think you know me.”

“We literally have some of the nicest fans I’ve ever met, especially when we travel around doing live shows.”

“It’s not cheating if you can do it.”

What is the net worth of Arin Hanson?

Voice actor and internet personality Arin Hanson has an estimated net worth of $2 million.

He earns most of his wealth from voice acting and advertisements on his YouTube channels.

In 2020, Arin provided his voice in the production of the video game Borderlands 3. In addition, Hanson has published a novel in 2020.