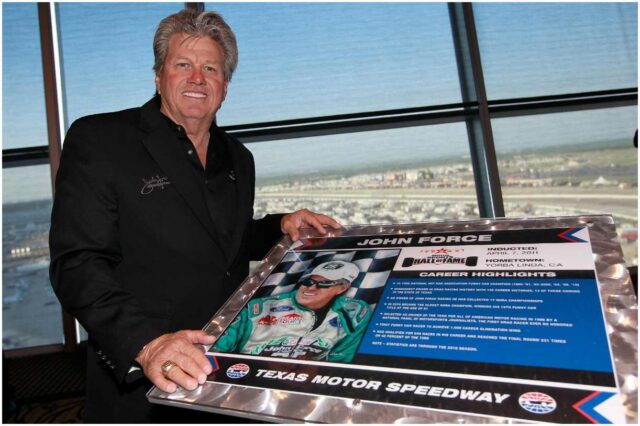 On October 16, 1993, he had become the first driver to set an official NHRA Funny Car elapsed time under five seconds in the quarter-mile.

On September 23, 2007, he was injured in a crash at the O’Reilly Auto Parts Fall Nationals in Ennis. Injuries sustained were badly mangled fingers, a dislocated left wrist, abrasion of his right knee, and a broken ankle.

In 2008, Force was inducted into the Motorsports Hall of Fame of America.

In 2015, he announced a partnership with Chevrolet.

In August 2019, Force scored his 150th Funny Car win. He said for Motorsport:

”I give credit to a lot of crew chiefs over the years.”

John went on to say:

”I got the monkey off my back and it drove me nuts. But it taught me to focus on my car if I want to do (well).”

”The truth is I don’t want to die in a race car. I want my final days to be with my wife, my children and grandchildren and my friends.”

He said about his second wife:

”I wouldn’t be here without her. In the beginning, she was the organizer. She wrote the contracts. I wasn’t smart enough, so they sent them back.”

”She worked on the vehicle with me, packed the parachutes, mixed the nitro and cooked for the teams. She was there through it all.”

Force has four daughters, one with his first wife, and three with Laurie. Laurie said:

”John really was pretty clueless about his daughters for a long time.”

”If I was to pin him down and ask him to tell me all their middle names and when their birthdays are, he couldn’t do it without a cheat sheet.”

Adria Hight is Force’s first daughter. Adria is divorced from Robert Hight, the president of JFR and an NHRA drag racer. Adria is the CFO of John Force Racing JFR.

”Dad wouldn’t know what to do with himself if we weren’t pestering him. He’d be lost without us harassing him.”

Courtney Force-Rahal (born on June 20, 1988) is a former drag racer who competed on the NHRA tour.

Courtney announced she would stop driving on January 24, 2019.

”Am I saddened by her leaving? Yes and no. I have mixed emotions.”

She said about her father:

”Not being able to see him a lot as a kid and now I get to see more than enough of him as an adult.”

”We definitely have a closer relationship now than we did when I was little.”

READ MORE: What is the net worth of J.B. Holmes?

His house (17,050 square feet) has an attached apartment for visitors, several fireplaces, a wine cellar, a formal living room with a baby grand piano, a sauna, a library, a gym, and eight bedrooms. John said about his house:

”It’s almost embarrassing. I’ve worked hard, and people say I’ve earned it. But it just seems like a waste. A big, dumb house.”

”I never had nothing growing up. If my dad came back and saw this house, he’d get a stick and whip me.”

John is committed to vehicle safety. During a 2007 interview, John said:

”We’ve got to continually think of safety. We lost Eric. And we can never, we can never – what his mom and dad went through, I can’t even imagine.”

”If you ever forget, it’ll happen again. The monster’s out there, trust me.”

In 2004, Force had a cameo in an episode of King of the Hill, an adult animated sitcom that was created by Greg Daniels and Mike Judge.

In 2019, when John was asked about retirement by Review Journal, he responded:

”Father Time is knocking on my door. But Clint Eastwood, he’s pretty old, and he said don’t let the old man in.”

”I have my days when I fight him, but I’m not going to let him in.”

He earned the nickname of “Brute Force” after winning his 4th Funny Car title in 1994.

Force earned most of his wealth from drag racing. He is 1-time AHRA Funny Car and a 16-time NHRA champion driver. In addition, John has his own NHRA drag racing team – John Force Racing.

READ THIS NEXT: Who is Leticia Bufoni?